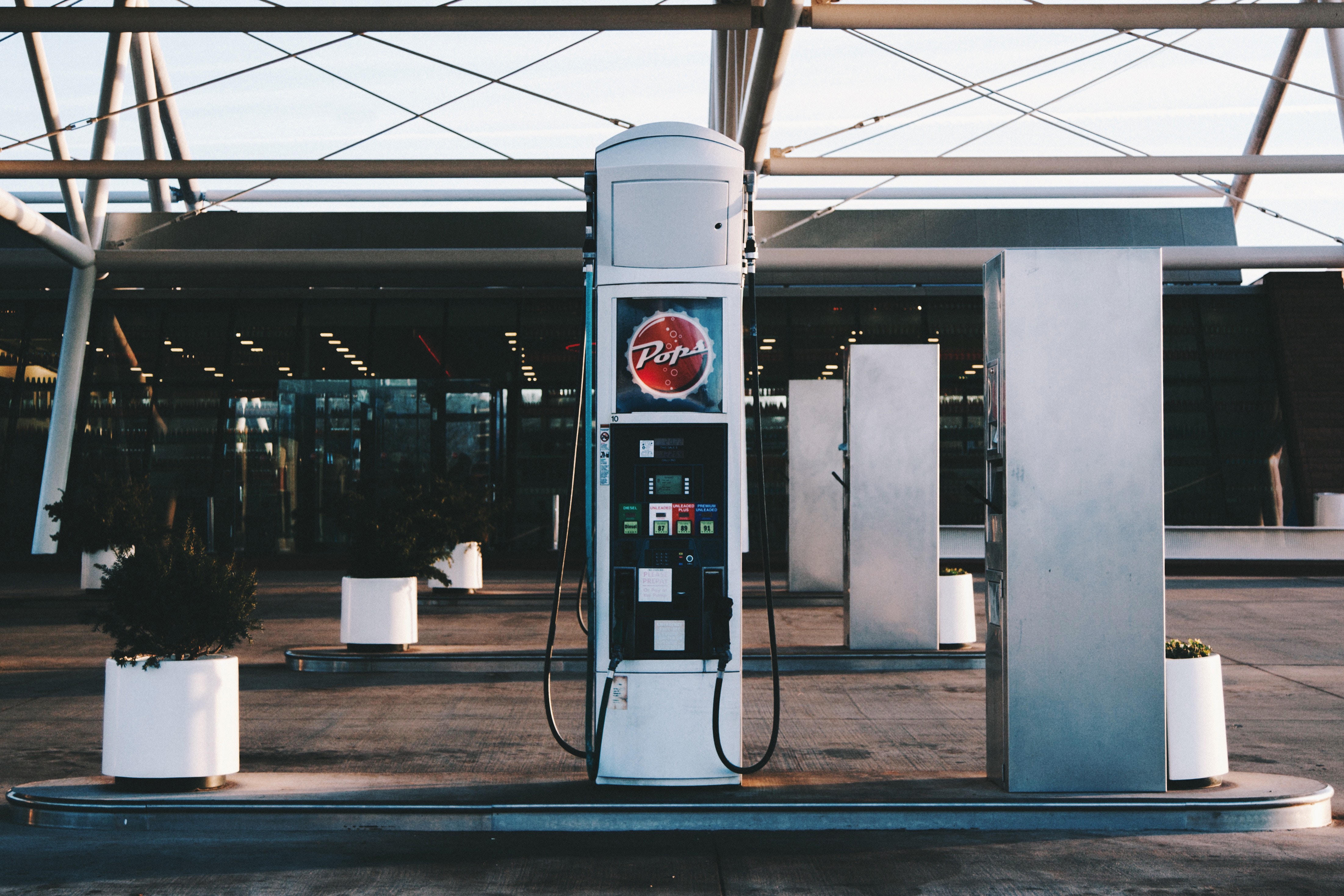 Photo by Caryle Barton on Unsplash

My elbows rest on the countertop as I look down into the abyss.  My knuckles support my boredom and my head, as they nestle beneath my cheekbones. I caress my earlobes with my thumbs to remind myself that I’m alive. Staring down into the Formica universe, the ink spots look like planets. I wish that I were in a parallel universe, not stuck in my father’s petrol station in the middle of butt fuck nowhere, willing my life away.

I barely lift my head, as I hear the whoosh of tyres through the rain and the squeal of breaks bringing the car to a sudden halt. I don’t give the car the privilege of even a sneaky look. At this time of year, it will be another family coming home from holiday. A well-built, weak-kneed, leering father who is dreaming of the sanctity of his office and his secretary, after spending two weeks with children that he only ever sees when they are sleeping in their beds. Or another well-meaning mother, whose smile will be close to breaking point. “Do you have a toilet?’ she’ll politely ask, as another Harry and Chloe, stand cross-legged in front of me.

I’ll give her a half smile, where only one dimple shows and hand her the key to the bathroom out the back, which I know is disgusting. However, I’m not in the business of cleaning away someone else’s piss. We put the key on a big dirty wooden spoon, so they don’t take it away with them to Sydney or wherever the hell they’re heading. I’ve lost count of the number of times I’ve gone chasing cars up the highway, my arms waving as I scream, ‘You’ve got our bloody key, you fucking moron!’ Sometimes I catch a glimpse of the father’s eyes in the rearview mirror, as he takes one last glimpse at my boobs, smiles and drives away.

I hear the familiar click of the petrol pump wrenched squealing like a puppy from its socket. It fails to get my attention. The purring of the pumps beneath me, suck fuel like greedy piglets on a massive sow. But nothing can take me away from my Formica universe, where my dreams are bigger than my shit house reality.

If it’s not the holidaymakers, it will be either Tom, Bob, John or one of the inbred, over-fed local fellas. ‘G’day Kerry, You still here?’ they’ll intone with a sleazy sneer. ‘Thought you’d have been snapped up by now. A beautiful girl like you should be at home making babies rather than rotting away here.’

No matter how old blokes get they still can’t help themselves making an unsubtle attempt, fooling themselves into believing that they might be in with a chance. I can always feel the stares of their wives as their eyes bore into me through their filthy windscreen on the forecourt. However, I know their hubby wouldn’t be foolish enough to ask me for a free wipe. Not while she was in the car.

Men would travel for kilometres around to use my father’s complimentary front and rear window wipe. Dad only discovered he was a master marketer when his five daughters hit puberty. My older sister Darlene was known around town for her tits that would heave and flatten against the glass, as she wiped the muck from the windscreen of some pervy old geezer in a ute. It took us all about five years to work out that Dad had sold us out for a full tank of petrol, a container of oil and a packet of Winny Red.

The glass door squeaks, as it drags across the rubber matting, scuffed raw by muddy boots. I keep my eyes downcast, in the act of rebellious defiance. A chunky set of keys drops loudly onto the counter. The motif looks exotic, something I can’t place. It could be Incan or more likely, a piece of rubbish picked up at a hippy market. A token to make the user feel worldly when the furthest that they’ve been from home is fucking Byron Bay.

A hand holding a fifty-dollar bill awakes me from my conscious slumber.
I lift my head, my neck uncoiling like a snake, vertebrae by vertebrae. My eyes widen, and I feel my usual sarcastic banter become trapped in the constricting chasm that is my throat. I look at the stranger like I’m scanning him using x-ray vision, absorbing every cell, taking in his unusual scent.

There is something gloriously eccentric about his dress: not the usual too short shorts and daggy blue singlet or the overly casual baggy board shorts. I hate board shorts, especially as the beach is 300 kilometres away. No, this man is wearing a suit. A well-cut pinstriped navy suit! I haven’t seen a man in a suit since my older sister Sue married Rodney Porter, the pig farmer. She’d insisted on a Fred Astaire/Ginger Rogers top coat and tails affair, complete with a whirl around the dance floor to ‘It had to you’ in the piggery that had been specially decked out for the night.

My shoulder twists in perfect motion with my wrist, extending out my hand like a cup. The handsome stranger’s slender fingers place a fifty-dollar note into my hand in the tenderest manner. Blood defies gravity and rushes to my face and neck covering almost instantaneously in a bright red rash that looks like the sunrise when there are clouds in the sky.

As I stare at him, I know this is my fate: to leave this town, to escape. My sisters with all their talk of the big wide world have all married locals, two of them falling pregnant accidentally when they were in their teens to boys, whose windscreens they had washed. The other two seem happy enough to eke out their living squeegee and bucket in hand in the hope that they’ll discover a local boy although, at 29 and 30, the pickings are slim. But for me, my time is now. I know it by the tuft of blonde hair below his knuckles, by the bulge of his wallet rested next to the chewing gum, by the speechlessness of this encounter.

I can hardly focus as I tap into the till. Just say something Kerry, I will myself.  ‘Did you use the leaded or unleaded pump?’ comes out of me in a broken high pitched squeal.

‘Unleaded’ he purrs in a whisper. His eyes narrow.  ‘Did you know petrol is my favourite smell in the world?’

‘Me too,’ I lie. ‘I love it.’ I hate the stuff, I’ve worked here so long that petrol oozes out of my sweat glands, but this must be destiny. The guy loves petrol, and I reek of the stuff.

He takes a deep breath in as if he is smelling the most heavenly French perfume. I feel my jaw bone lift inviting him to sniff my neck and drink in my petrol.

‘I love grease too. There’s nothing sexier than dirty grubby fingernails,’ he flirts. I look downwards at my fingers and wish that I hadn’t spent the morning cleaning and filing my nails until they looked like they could pass the harshest military inspection. I instinctively curl my fingernails and hide them under my thumb.

I look down at his immaculately clean hands, his fingernails are bright like a half-full moon. He looks as if he has spent a lifetime defending them from the ever-present threat of the encroaching cuticle.

I try to engage him in conversation. ‘So you’re not from around here?’

‘Nice town,’ I say as I give him his change and then flash him a double dimpled smile.

‘See ya!’ he says casually and turns his back on me to leave. I see my destiny, my chance at freedom walking away, so I call out in desperation. ‘We also do complimentary windscreen wiping!’

Before he has the chance to answer, I spring out from behind the counter and follow him outside. His car is green and sits low, hugging the ground. There looks as if there is only enough room for two. The side windows are dark, the windscreen covered in a cloud of fine red dust. I grab my bucket from beside the petrol pump. The water is murky. I lug the bucket over to the suited stranger’s car as he slips inside ready for my forecourt floorshow.

I plunge my hand into cold water and find the sponge to wipe away his dirt. My whole body twists to reach the passenger side as the cloth sends a cascade of water over the glass. I reach down and grab my squeegee. I wipe once, twice and look inside the car.

I see his hand run through the slick-back hair of another suited man in his car. My heart sinks deeper than the petrol stores beneath my feet. Mesmerised by the duality of the cleanliness of his hands and greasiness of the man’s hair, I want to break the glass of his windshield.

I finish the job with more care than I like to remember — the tenderness of the stranger’s hands willing me on. He leans his head out of the window, yells thanks and waves. I step aside as he turns the key and his car comes to life and roars away. My dreams explode like a firework in a petrol tank.

I walk back inside through the bright coloured packets of sweets used to lure children to spend their parents hard earned cash, past the gentle humming of the refrigerator keeping the sugary drinks cool, past the Oils, WD40 and roadmaps to the counter. I open the till. I take a fistful of bills and slam it shut again. I grab my ciggies and lighter and spark up a fag. I walk out of the shop, lighter in hand, I flick my cigarette onto the ground where the petrol lays spent and dormant. I see the tyre tracks his car made heading somewhere I need to be. I take one final deep breath of petrol and follow them away.