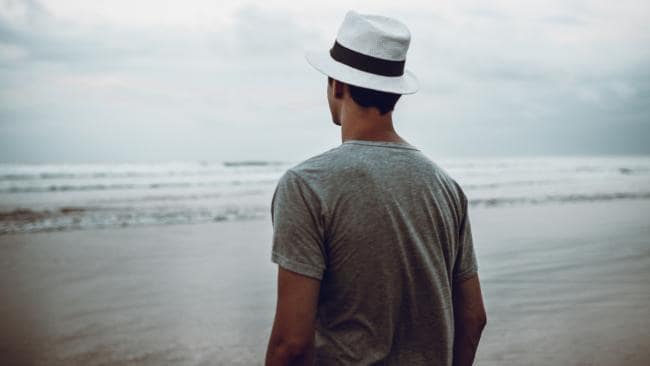 Matt is 6ft tall and covered in tattoos but he almost didn’t survive living with his abusive girlfriend.

As told to Lollie Barr

Matt, 31, works in telecommunications and lives in North Queensland, Australia. He has experienced two abusive relationships with two female partners. It nearly cost him his life.

People have a hard time reconciling the fact a man just shy of six feet tall, covered in tattoos, who regularly attends the gym and plays rugby could ever become a victim of domestic abuse. I never thought it could happen to me once, let alone twice.

In 2015, I divorced. My wife didn’t want kids and we’d grown apart. It was a civil breakup and we both left the relationship psychologically in good shape. I still had complete faith in love. However, looking back, I was naive about the different kinds of personality types out there.

I met Josie*, at the local pub in the small city where I lived. She seemed nice and friendly. Initially, she bombarded me with attention. I was six months out of a marriage, 28 and an attractive 22-year-old girl was telling me I was a catch, the hottest thing ever and what an absolute idiot my ex was for letting me go. It was flattering.

I fell for her, but I quickly found out she had a vicious temper and tongue
In my previous relationship, when we’d argue, it would be soon over. However, with Josie when there was conflict, she’d escalate it to the point of abuse. There were the usual profanities, but it was denigrating language she used that had an effect I could have never have predicted.

I was derided as worthless and hopeless, but her favorite word for me was pathetic, which she used frighteningly regularly. Josie told me I was worse than a girl, I carried on like a woman and she would scream how much she hated me

My rational brain was thinking if you think this way about someone why are you even with them? But she’d already engaged my emotional brain in a dangerous game.

She’d change on the flip of a coin, one moment she was adorable and then she’d just turn nasty out of nowhere. She was paranoid and jealous to point that she had all of my passwords. The mixed messages created confusion in my mind.

I found myself walking on eggshells trying not to set her off
I started suffering from anxiety. But I just forgave her. It’s crazy, but I began to think maybe it was for my own good. Perhaps she was right about my character flaws and I needed to be a better person, so I found myself apologizing to her.

It was only a six-month relationship, but due to the relentless verbal abuse, the damage she caused was immeasurable.

To the outside world, we were a happy couple because she abused me behind closed doors, or, she loved tormenting me on the phone or by messages.

Why didn’t I just walk away?
It’s like Stockholm syndrome when hostages create a positive emotional relationship with their abductors to survive. You believe it’s love. However, the way she controlled me was to make me believe that there was something seriously wrong with me.

Due to the turmoil in mind, I felt worthless, especially as a man, copping this sort of abuse. What kind of man would put up with this? A weak one. It was an endless downwards cycle.

She liked to have ultimate control. Everything had to be on her terms. She had to do the organizing. If I tried to organize anything, she’d turn it and say I was controlling her and I’d cop another mouthful.

I told some friends and they would tell me to get over it, to man up, not to let her play with my head, but it was too late. I’d rationalize her behavior by thinking it’s just a phase she’s going through and it will be over in a week. Then she’ll be nice again.

If I tried to open up about my family life and personal life for support, Josie would say she didn’t care. My mother and father separated when I was eight years old. There was no physical abuse, but it was very bitter and got very angry. I put most of the blame on my father who was a heavy drinker and his abusive behavior took its toll on our family. I’d always vowed not to be like my father so that maybe that’s why I didn’t fight back. I also knew if I did, I’d be portrayed as the aggressive one.

It affected me so much, I made a serious attempt to take my own life.

I died that night and had to be revived
When Josie found out, she accused me of faking it. Instead of finding out what drove me to that point, she was angry at me and just gave more of the usual abuse.

I finally left her a week later, then her crocodile tears started. She backpedaled and said, “You’re a nice guy, you didn’t deserve this.” When I asked her why she was so abusive she replied, it was because she couldn’t handle the fact I’d been married and that she was a “cold-hearted bitch.”

Once the relationship was finally over, I still didn’t get the help I needed. I drank heavily to dull the pain. I was a broken person. I felt anxious and depressed, but I thought I was okay. I moved on six months later, dating a woman who’d been a friend. I was 30 and saw my friends settling down. I had this sense that time was running out. We got engaged and decided to have kids but Hailey* became physically violent when she was drunk.

The first time she did it was in front of my mother. It was her 30th birthday and she’d had a violent disagreement with her sister. When I stepped in, she punched me hard straight in the face. In the morning, she apologized and I stuck up for her when my family tried to talk to me because they were aware that I’d come from an abusive relationship.

The second time, she’d been kicked out of the local pub and she punched me then she spat in my face. Another time she came home drunk and she couldn’t find her phone. She was frustrated, so she attacked me with punches designed to hurt and threw her engagement ring at me.

I would never, ever hit a woman
As a man that puts you in a vulnerable position of just how to subdue a violent woman. All my mates were like, you shouldn’t put up with that, but I just ignored it. I should have walked away, but thought I was overreacting. She could be nice when she was sober.

When we finally broke after two years, I felt a sense of relief. But she wouldn’t let me get my stuff from our house, so I went to the police and reported that she had been consistently violent, the officer said what did you do? The assumption was either I was a bit soft and needed to harden up, or I’d done something and was copping a bit of my own medicine.

That’s what sucks. I’ve seen the help that abused women get, which is fantastic, I hope one day men can get the same help.

I wish men could get the same help women do
I let the anger bottle up. I was drinking too much and got into a physical altercation with a guy at the pub. I’d always left the violence on the football field, so I knew if I didn’t sort it out, I was either going get hurt or hurt someone. I was spiraling downwards and someone at my work noticed that I was struggling. They helped me find some mental health specialists.

I went to Beyond Blue and One in Three Foundation, which supports men who’ve been in abusive relationships.

Female-to-male violence is hard for people to understand because usually a man is physically stronger but ultimately it’s about mental cruelty. Afterward, I was diagnosed with PTSD. That was tough for me to process, as I’m not a soldier or a police officer on the front line. All I did was suffer some abuse, so I felt as if I was a weak person. After counseling, I realized that how the cycle of abuse affects you.

I’ve come in leaps and bounds, by finding the help and laying off the alcohol. Now I’m in a much better place with a girl who loves me for who I am. A year into a functional relationship, it demonstrates to me that what I went through wasn’t normal, it was abuse.

This story appeared on whimn.com.au and nypost.com